Buckle up kids, we’re about to go on a journey. Let me set the scene for you. It’s one of those summer days that feels like it’s going to last forever, the golden heat doesn’t make you hiss and recede into the shade but is just enough to warm your skin and make you feel warm and fuzzy inside. It’s one of those days when you’d like to sit back and relax by the pool with your family. Just as the sun starts to fade into the horizon, you retreat to your kitchen and start to think about what will satiate your tastebuds; what you could possibly throw together that will put the cherry on top of this glorious day.

That’s when it hits you: homemade pizza. It requires minimal effort, will make everyone at the table happy and is the perfect excuse to add heaps of mozzarella to a dish! Unfortunately, we’ve all had the cooking mishap where the crust comes out soggy, the toppings aren’t quite done or it just lacks the pizzazz that you were expecting.

Lucky for you, I’ve finally cracked the code to achieving the ultimate homemade pizza every single time. Today, I am sharing the secrets with you! So get your apron and rolling pin ready because we’re about to get into this dough.

This is the vessel that will deliver your toppings to the dinner table. You could just buy any old frozen dough from the supermarket but that’s not how we do things around here. I find that storebought crusts bake much faster than the toppings and are either grossly underdone and soggy or are burnt and inedible. No my friend, if we’re going to do things the right way then we’re going to make our pizza dough from scratch.

‘But isn’t that time consuming?’ you lament. Homemade pizza dough only requires 15 minutes of hands-on time – even less if you have a stand mixer.

I always use my trusty recipe for homemade pizza dough, and it makes enough dough for 2 pizzas, so you can freeze one and defrost it whenever you get the pizza craving. In fact, that’s what I usually do and it is the most convenient thing on this planet. You never know when you’ll feel the irresistible desire to have hot cheese in your belly, but I promise you that the day will come. When it does, you will be overcome with gratitude that you made an extra pizza dough. That doesn’t nearly compare to the disappointment you feel when you thought that you had an extra pizza dough lying around and realise that you used it last week. #oops.

Alas, homemade pizza dough isn’t the only hurdle you need to jump over to attain that perfect golden crust. one must also consider their toppings. If you overload your pizza then you are assured of a soggy crust. If you can’t help it and you need to pile your crust with spinach, avocado, mushrooms, pineapple, caramelised onions, olives, sweetcorn AND chickpeas (adds a nice crunch to pizza I must admit)- then you can alleviate the situation by cooking some of the toppings first. I normally don’t cook spinach before I add it to a pizza but I will briefly saute mushrooms, peppers or onions before adding them to a pizza. Toppings such as broccoli, chickpeas and eggplants would be better off roasted in the oven before going on top of a pizza. 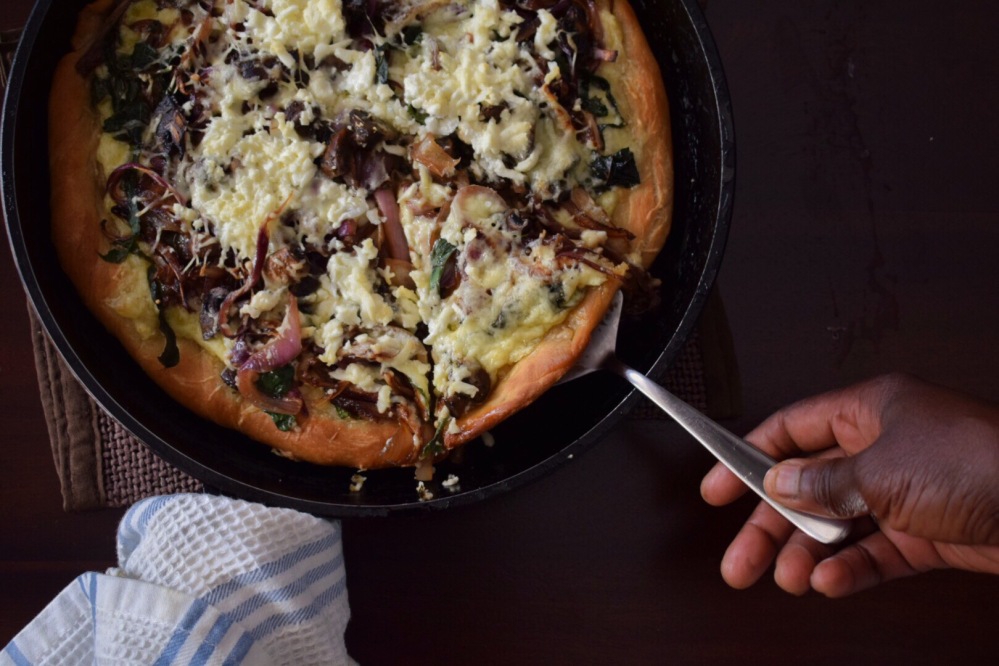 Another strategy that I recently employed is to bake my pizza in a skillet. To see this tactic in action, head over to this recipe. The method is simple: heat a large skillet on the stove until it is sizzling. Dust the hot pan with cornflour and quickly toss the dough onto the hot skillet, making sure not to burn your fingers. Cook the dough for 2 minutes on the stove before adorning with your toppings. That’s simple enough, right?

There’s more to the crust than you thought. There are several ways to prepare a pizza dough, one doesn’t have to adhere to the standard yeasted dough technique. If you find yourself short of yeast then my homemade pizza dough recipe includes a yeast-less option though I have to tell you that it isn’t nearly as good as the yeasted version. There are other options out there!

For those of you who are gluten free, cauliflower crust is a viable option. It’s easy to prepare, even if you don’t have a blender then you can use a cheese grater to get the cauliflower down to mini-florets. This crust is perfect for those of us who are fans of super-thin crusts, it produces a beautiful thin crust that is golden, crunchy and all for a fraction of the calories! There a couple of drawbacks with the cauliflower crust- it is much easier to yield a soggy crust. To avoid this dilemma, you have to make sure to squeeze all the water out during preparation. You also can’t go topping crazy with this crust because of how thin it is. Overload the crust and the pizza will just fall apart in your hand. You have to exercise restraint with this one. Ready to give it a go? In the photo below, I made this Chickpea Cauliflower Crust Pizza by Tieghan over at Half Baked Harvest. It’s well worth a try!

Other options include a broccoli crust (similar to the cauliflower crust, the only difference is the colour which could potentially offset small children), chickpea crust and quinoa crust all of which I am yet to try. Another option would be to grab a piece of naan bread, spread some of the best pasta sauce on it, sprinkle some cheese and a couple of toppings before baking in the oven. Can we call it a pizza when it is technically a flatbread? Why yes, yes we can.

Pizza is not baked in a 180°C oven. Pizza is not baked in an oven that you turned on 30 seconds before baking it. This is non-negotiable. If you have an open fireplace (lucky you) then you can can prepare yourself an authentic oven roasted pizza. The rest of us peasants will have to settle for preheating our ovens a full 30 minutes before baking the pizza, and setting the oven temperature to the highest setting- for me this is about 225°C/575°F. I know that all you conservative penny-wise readers out there are already whining about the electricity bill, but believe me, you will not yield a golden crust with gooey cheese in a cold oven.

The oven has to turned on in advance to ensure that heat spreads to every corner of the oven, we want it to be at a relatively even temperature. On that note, try and keep your nosy hands from opening the oven several times whilst the pizza is baking. You want to keep the heat locked in for maximum crust crunchiness. The only time that your oven door should be open is to put the pizza in the oven- and that shouldn’t be more than 30 seconds. That is all! If you happen to be the proud owner of a pizza stone, this should be preheated at the same time as the oven. Watch your fingers!

Oh man, pizza is as much about the sauce as it is about the crust. If the crust is the vessel then the sauce is the captain. Sure if the vessel is strong enough then that may be good enough to disguise a bad captain but there’s not much in the way that can save a sauce that’s too acidic, too spicy or just lacklustre in nature. The sauce is what taints the flavour of the toppings. No amount of cheese could remedy this situation. My go-to pizza sauce is also my go-to pasta sauce because everybody loves versatile options! Great sauces include barbecue sauce, any sort of pesto and Bechamel sauce.

Mozzarella will never not be good on pizza. If you’d like to stray from the safe zone then there are other cheeses waiting with open arms! I’ve used ricotta before and combined it with a killer balsamic reduction to give you this delectable pizza. Burrata, provolone and white cheddar are also really good on cheese.

Another thing I’ve grown to love this year is huge puddles of gooey cheese on pizza. Can’t get enough of them. To achieve this, cheese is sliced thinly, rather than grated and is layered on top of the crust before baking. Heaven, I tell you, heaven.

Now that you know all my pizza making tips, go forth into the world and enjoy your pizza! Is there anything I missed? Let me know in the comments! I’m always looking to gather information from different sources and I’d love to hear what you think makes a great homemade pizza! Until next time loves,