Who doesn’t love a good cheesecake? Dessert does not get better than this. And with the holiday season upon us, there’s no need to be counting calories and jumping on the scale. Now is the time to celebrate, to eat, drink and be merry!

I know a lot of people get intimidated by the idea of cheesecakes (me especially) because it always seems like a hassle. Firstly, I don’t own a springform pan: so any kind of traditional cheesecake is officially out of the question. Secondly, baking a cheesecake could lead to a multitude of problems, from cracks as deep as the Grand Canyon forming, to having the water leak into the crust from the water bath to yielding a cheesecake drier than the Sahara Desert. Thirdly, dressing up a cheesecake can be tricky. Honestly speaking, I think that dressing up your food is the best part of cooking, but when there’s a considerable disparity between the image in your head and what’s sitting in front of you, one tends to get discouraged easily.

So my friends, I abstained from the art of cheesecake making until I realised that it didn’t have to be difficult at all. This recipe scores a 10 on the easy scale. It requires minimal effort, all you have to do is combine the ingredients in a bowl, whip them together, leave it to set in the fridge overnight, and you’re on your way to cheesecake goodness! If you’re too lazy to bake the crusts in the oven, no problem! Leave the crust out completely and scoop the cheesecake mixture into glasses instead. Top with lemon curd and crushed biscuits and you’ve got a killer dessert on your hands. Happy indulging!

For the mini cheesecakes:

Preheat your oven to 180°. Line 9 cupcake tin spaces with paper wrappers, or if you have a mini-cheesecake pan, grease 9 of the available spaces. Add the Marie biscuits to a Ziploc bag and use a rolling pin to crush them until they’re fine crumbs. Alternatively, you could add the biscuits to a food processor and pulse until they form crumbs but that isn’t as fun.

Transfer the cookie crumbs to a small bowl, add the melted butter and sugar and stir until combined. Add about a tablespoon of the crust mixture to each of the prepared cupcake liners, and use a shot glass or the back of the tablespoon to smooth it into an even layer. Bake in the preheated oven for 6 minutes or until golden brown. Remove to the fridge immediately to cool and switch off your oven.

In a large bowl, use an electric mixer to beat the cream cheese and sugar together until smooth. Don’t feel bad about overmixing, try and make sure that you get all the lumps out.

Once the baked crusts have cooled, pour the cheesecake mixture into each of the moulds. Don’t be afraid to fill the mould right up to the brim, there is no risk of the cheesecake overflowing. Refrigerate for 4 hours (I just went overnight to be safe) or until set. Top with lemon curd and extra lemon rind when ready to serve. 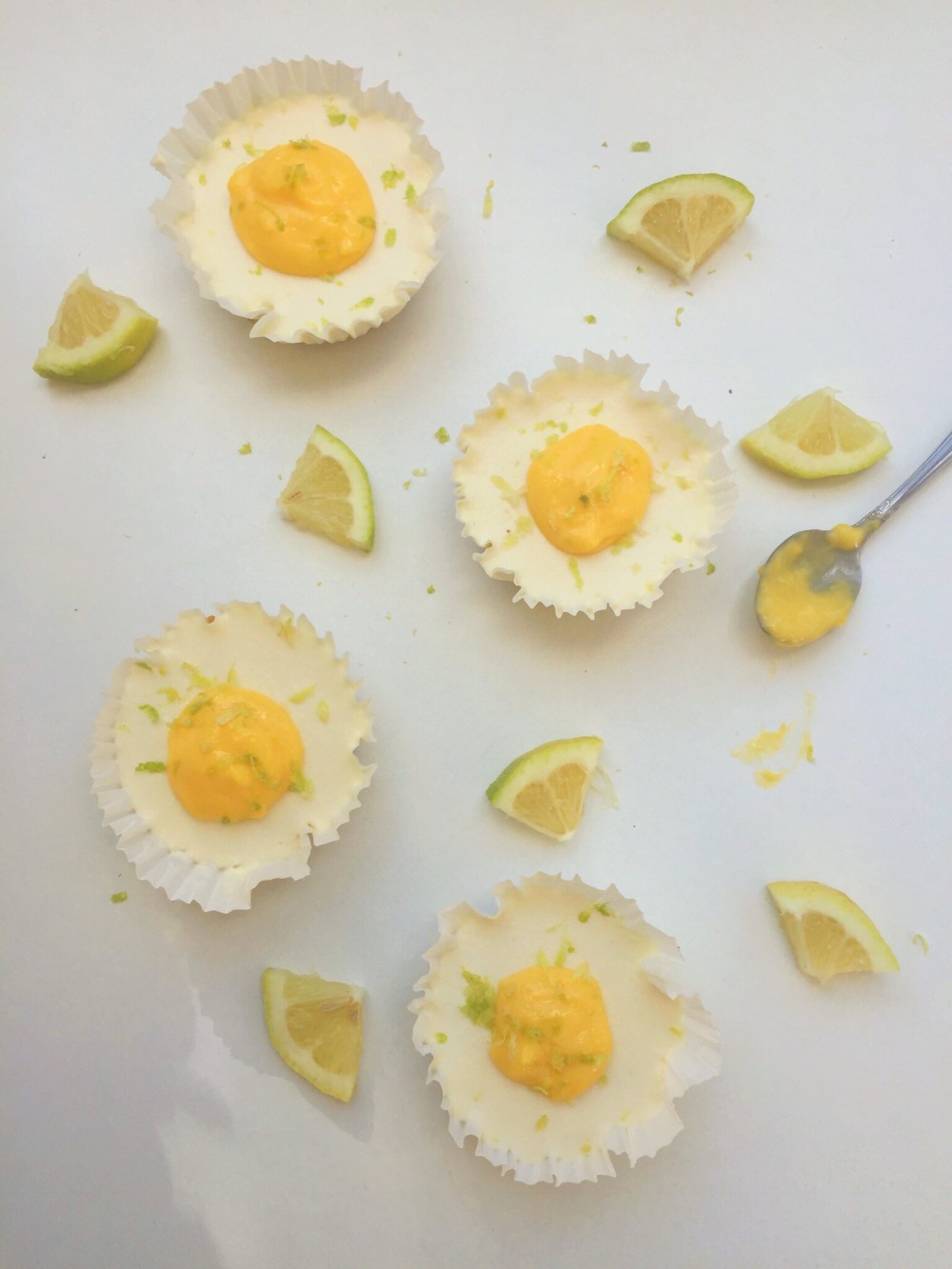 Tis the season for sharing, so if you’re feeling inspired by this recipe, tell a friend! Subscribe below to receive an email every single time I post a new recipe!